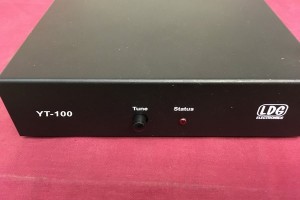 The YT-100 connects to the radio via its Tuner port to control the tuning cycle. The radio’s Tuner port also powers the tuner, so it requires no external power supply. The YT-100 handles up to 125 watts SSB or CW (100 watts on 6 meters).

The YT-100 integrates with you Yaesu transceiver for seamless operation. Since the YT-100 is matched to your specific rig, you just press the Tune button on the radio, and the rig and tuner do the rest: reduces power, transmits a carrier, automatically matches the antenna to the rig, then restores the original power and mode.

Like all LDG tuners the YT-100 operates automatically, beginning a tuning cycle whenever the user presses the tune button on the tuner. It also features LDG’s advanced memory tuning, providing 2,000 memory locations; when tuning near a previously used frequency it will recall the settings for nearly instant tuning. It learns your favorite frequencies and bands as you use it. You can also start a tuning cycle manually whenever necessary.